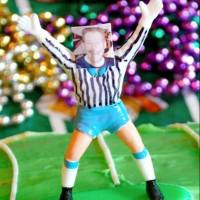 So what do you do when the man at the center of your life is gone from your world? You plan a party, of course! Well, sort of…

Parties. We were not “party-ers”, those people who make the rounds looking for lively experiences to escape their mundane existence with drink and loud music. But we did love a good party. In fact, we met at a party.

It was the 4th of July, 1985. I was staying at my parents’ house for a few weeks while taking classes at a local university, and my folks were having their annual church Independence Day celebration. Kids splashing in the pool; food platters being arranged on tables; deep-pit meat roasting in the ground; people milling around laughing and talking.

One handsome well-tanned guy, hands in pockets, looking like a tennis star, stood alone in the center of everything. I kid you not, it was like a beam of light was shining down on him from above. I was in the house helping my mom in the kitchen when I noticed him through the window. My heart skipped a beat. Literally. And then it began to pick up its pace. I scanned the area around him. He appeared to be all alone.

“Mom, who’s that guy?” I knew most of the people there because I’d been a part of that church for a good chunk of my life, and that good-looking one was not part of the usual crowd.

My mom glanced up, realized who I was talking about, and said, quite emphatically, “Him? No way! Don’t get interested in that guy!” She even made slashing motions back and forth with her hands. Being the stubborn gal that I am, that only added another layer of intrigue to the mystery of this man.

So, to cut to the chase, Randy and I began a relationship that night. The fireworks shooting off sparks were no match for the blaze being stirred up between the two of us as we sat in lawn chairs side by side watching the show. I found out Randy had three kids and was going through a rough divorce. Aha. That explained my mom’s adamant reaction.

We dated for a few months and married the following March. Our life together was far from easy, but those tales will wait for another time. The bottom line was, we loved each other, and we managed to weather some pretty fierce storms.

But back to the party theme. Yes, we met at a party. And we threw a party every year on Super Bowl Sunday. These were the events people wished they’d be invited to. Our little house would be brimming with sixty-some people, families with kids of all ages, and decorated to the point that not much empty wall space could be found: pennants, posters, and random football-themed items hung everywhere. Pretty much every room had a TV in it, even the bathroom. It was a crazy, exuberant, noisy, fun madhouse. Each year was better than the year before. Lots of family and friends, enough food to feed an army, Super Bowl cake, and somewhere in there, a football game!

Yes, we threw a fabulous Super Bowl party every year, until the last handful of years that Randy lived. His pain level had grown to the point that he didn’t really want to be around people much. Our world grew smaller, more secluded, and seldom included dates on the social calendar.

There were other parties over the years: some pretty awesome birthday parties, the annual Allee family Christmas Eve brunch, graduation parties… But none of them had near the attendance as the birthday celebration of 2009.

Randy died on August 16, 2009, five days before his 58th birthday. When I sat down with the four kids and Randy’s mom, we began to discuss how best to honor this larger-than-life guy we all loved. And that’s when it hit us: let’s have his memorial service on his birthday! That may seem an odd day to some, but we knew that Randy would have been the first to suggest it if he could have.

We met with the pastor, made all the arrangements, ordered a special birthday cake, and turned a day of mourning into a celebration of a truly unique life. The church was packed wall to wall, and anyone showing up late had to park way down the street. When I turned around in my seat to survey the crowd, I realized that no other event had filled the building to this capacity. What a testament to the impact Randy Allee had on other people! Each of the kids shared something special: Joel sang a song and Janelle, Michelle, and Mike all spoke about the larger than life man they called Dad. There were some tears shed and lots of laughter, with many hugs and exclamations of “That was the best funeral I’ve ever been to!” when it was over.

After the service, we had a meal in the fellowship hall, with the birthday cake on display. When in the hospital, Randy had talked about going fishing with Jesus, and the cake celebrated that theme.

As I think back on that day exactly 6 years ago, I can imagine Randy watching the event from heaven, enjoying the celebration. And when it was all over, I can see him turning to Jesus and saying, “Hey, wanna go fishing?”

Posted by Debbie Allee Nelson on August 21, 2015 in Uncategorized